A Healthy Dose of Drive

David Mancari’s first job in HR was as an executive intern at Target Corp. in New York. It was just a 10-week rotational assignment, but it didn’t take long for Mancari to see how well HR aligned with “my natural ability” to collaborate with people from different backgrounds. “I really just fell in love with it,” he says.

After four-and-a-half years at Target as an HR manager, Mancari joined Montefiore St. Luke’s Cornwall as an HR coordinator in 2015. Within a year, he was promoted to employee and labor relations specialist and then, in 2017, manager of human resources business partners for the 1,500-employee nonprofit hospital, whose workforce is 75% unionized.

There, particularly in his current role, Mancari has put that “natural ability” of his to work by spearheading the development of world-class programs and initiatives that have helped raise the Newburgh, N.Y.-based hospital’s engagement score from the 4th percentile in 2012 to the 83rd percentile in 2018. Those efforts have also landed the hospital on the Great Places to Work list for two years running.

Giving frontline leaders at MSLC the tools and resources they need to succeed has been a high priority for Mancari, who has a bachelor’s degree in business administration from Marist College and is just finishing his MBA at Syracuse University. Specifically, he was instrumental in creating training initiatives aimed at helping these leaders develop their skills and abilities, including how to recognize and engage their talent, and how to more effectively handle disciplinary actions. 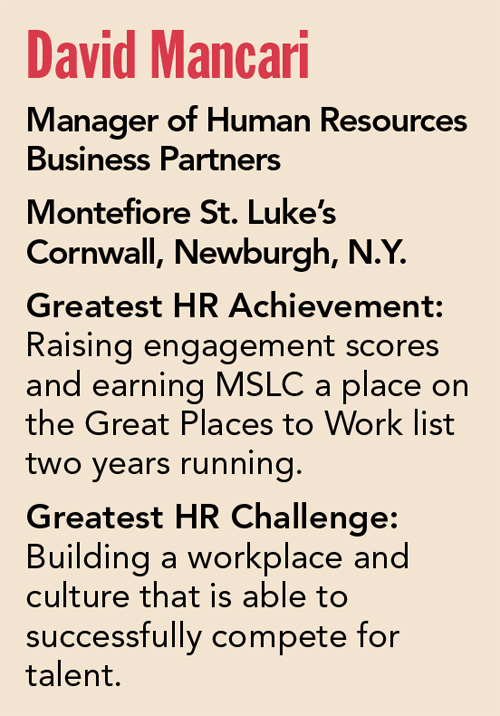 Regular CEO forums were established to give employees the opportunity to share what’s working in the organization and what could use improvement. One outcome was a program called Badge Buddies, which made it clearer to patients with whom they were interacting at the hospital.

“These forums not only improve the patient experience,” says Mancari, “but they also say to employees, ‘Hey, you spoke, we listened to you and things got done.’ ”

MSLC also uses the gatherings to talk about employee benefits, such as the hospital’s home-ownership program, which provides employees who would like to purchase a home in the city of Newburgh a five-year, $11,000 forgivable loan that could be used to cover closing costs or pay a down payment.

The hospital’s employee-assistance program has been a major focal point for Mancari.

“Being a vital-access provider,” Mancari says, “we see a lot of traumas on a regular basis. There could be a mass shooting involving children that could seriously impact those providing the care–so, we want to make sure we’re providing them the support they need.”

When a traumatic event occurs, MSLC’s EAP provider, Carebridge, sends in a psychotherapist and social workers, who are able to assist those employees in need of support.

Expanding on that support, Mancari spearheaded the addition of a “second-victim” program to further assist workers throughout the entire organization following such a trauma.

Mancari also led the formation of the hospital’s first diversity and inclusion committee, which now stands at 15 members and represents every level of the organization. The committee, he says, is viewed as a way to spur greater workforce creativity and innovation. D&I efforts range from videos in which employees tell their own personal stories to Diversity Days, which encourage employees to share their culture through cuisine in the hospital cafeteria.

“It gets a lot more attention and a lot more buy-in from employees when you have them tell their own stories,” Mancari says.

Mancari also took steps to improve the hospital’s Catch a Star program, which recognizes employees for “Service, Teamwork, Attitude and Responsiveness.” Among other things, he brought on to the committee employees from every level of the organization and moved the nomination process online.

Further, he added a new wrinkle to the program: Shining STARs, which recognizes those who received 10 or more nominations. Photos of the recipients are featured in the lobby, along with a “powerful quote” from a patient or co-worker.

On Mancari’s watch, MSLC also deployed Kahoot, an app that periodically solicits feedback from employees on various topics, such as what leadership should be focusing on and how a particular process can be improved.

“It empowers everyone to have a voice within the organization and enables them to share what they think in an open forum,” he says.

It’s simply one more way Mancari has helped improve employee engagement and performance at the hospital.

Strengthening the way MSLC approaches recruiting has been another major focus for Mancari. As recently as 2017, he says, there really wasn’t much of a process at all. In many instances, managers weren’t even able to select their own people. So, to rectify that, he set out to transform how things were done from start to finish.

As a part of that process improvement, Mancari, working closely with the hospital’s chief nursing officer and her assistant, instituted panel interviews, where multiple people were assigned to interview candidates.

“There are certain things one person simply won’t be able to pick up on,” he says. At the same time, Mancari restructured the hospital’s behavioral-based interviewing process, adding the use of guides that helped raise awareness of the core competencies that were being sought for various nursing positions.

In his nomination of Mancari, MSLC Vice President of Administrative Services Dan Bengyak says that Mancari has excelled in his various roles by “taking on the challenge in front of him and shaping the role into his own.” He adds that nothing ever escapes his “observation and control.”

Along with the broad experience he’s gaining and the success he’s demonstrating in his current role, these attributes should go a long way to helping Mancari achieve his longer-term goal of someday heading HR at a Fortune 500 corporation.