We’re in the best economy the U.S. has enjoyed in 12 years, yet the vast majority of employees still say they’re financially stressed. How employers handle this will impact everything from retention and workplace accidents to healthcare costs and outcomes.

Experts say the financial stress employees feel is real and is especially acute for lower-wage workers. Recent statistics include:

Healthcare is taking a bigger bite from barely growing wages: Annual premiums for employer-sponsored family health coverage reached $19,616 in 2018, up 5 percent, with workers paying an average of $5,547 toward the cost of coverage. The average deductible was $1,573 for single coverage.

Financial stress can have a profound effect on how employees do their job. And the cost of this stress to American business is $250 billion lost annually, according to Mercer’s Inside Employee Minds Financial Wellness Survey, as employees spend an average of 12 work hours per month worrying about their money.

This isn’t just an American problem. Globally, employees are feeling financial stress and are growing increasingly concerned about the state of their finances today and over the long term, according to the Willis Towers Watson 2017/2018 Global Benefits Attitudes Survey. Twenty-seven percent of workers globally report severe stress, anxiety or depression over the past two years due to their financial situation, with worsening financial wellbeing diminishing employee productivity, engagement and health.

“It’s pretty sobering. People are living well beyond their means,” says Dr. Bruce Sherman, medical director for population health management at Conduent HR Services. And for employers, Sherman says, “there is a direct cost and an indirect cost related to financial stress: lost productivity, worker turnover, performance, absenteeism and presenteeism. But at least half the costs are associated with poor health.”

A 2014 study by the National Health Interview Survey found that chronically ill adults who reported inconsistent access to food due to financial instability were much more likely to skip filling drug prescriptions. In other words, employees are making the toughest choices: Feed their families, keep the lights on or access the healthcare services they need.

“People aren’t using [healthcare] services because they’re out of cash,” Sherman says. “With lower-wage workers, personal health concerns are a lower priority unless people are symptomatic, in which case they go to the ER.”

The rising cost of insurance isn’t helping. Over the past year, the average cost of a single health-insurance premium increased 3 percent to $6,896, while the average family premium increased 5 percent to $19,616. This doesn’t sound too bad, except that the 2.6 percent increase in workers’ wages last year was eaten up by inflation, which rose 2.5 percent. That means higher healthcare costs cut further into employees’ take-home pay.

Overall, the average premium for family coverage has increased 20 percent since 2013 and 55 percent since 2008, according to the Kaiser Family Foundation’s 2018 Employer Health Benefits Survey, far above both the rate of inflation and worker-wage increases.

Worse, according to the Centers for Disease Control and Prevention, nearly 44 percent of the population is enrolled in a high-deductible healthcare plan. That means employees who choose those plans–primarily because they reduce the amount of the payroll deduction–then have to front the full cost of the high deductible for themselves and their families.

“Too many employers believe that, because they are seeing a low-cost-deductible trend, it means less need for services,” Sherman says. Instead, it’s about preservation of cash. What happens then is typically much more costly for both the employer and employee: “You see catastrophic claims and diagnoses of advanced cancers where, with an early diagnosis, someone could be cured with inexpensive treatments versus not being cured later on, even with much more expensive therapies.”

At a recent conference, Kent Lingerfelt, senior vice president of compensation and benefits at Equifax, relayed how the company used its own Benefits IQ data. Through this process, it discovered that, for employees earning $30,000 per year, healthcare premiums plus the out-of-pocket maximum represented nearly two-thirds of net pay, and more than 25 percent of net pay for an employee earning $60,000 per year.

“It’s unsustainable,” Lingerfelt said, noting that the company undertook a major redesign of its health benefits due to this discovery in order to lessen the financial burden on its lower-paid population.

Can You Solve Financial Stress by Raising Wages?

Discussions about how to reduce the financial stress of lower-wage workers inevitably move to raising the minimum wage. Several cities and some states have boosted minimum hourly wages to $15, well above the federal minimum hourly wage of $7.25.

“Our average wage is north of $15 per hour,” says Teusch of Lowe’s.

Simply raising wages isn’t enough to compete in today’s labor market, he argues, even if it were affordable. “The first observation I’d make is that the current labor market is different and, by different, I mean that [compensation] expectations have been raised in a meaningful and compelling way.”

Teusch says all employees, including lower-wage workers, want the flexibility to manage their own hours. They are looking for extra income but also for meaning and purpose. They want recognition as well as policies that seem tailored to specific situations, such as commuting or child-care assistance.

Employers “have to evolve beyond base competitiveness” and design specific experiences to help employees navigate across the lifecycle, he says.

“We have people who struggle to make it paycheck to paycheck because of what’s going on with their lives. In the modern economy, there’s more anxiety than there ever has been, and we’ve tried to provide a stable foundation,” Teusch says.

All Lowe’s associates participate in bonus plans and have access to affordable healthcare, he adds. The company also offers 401(k)s and is among the few that do not provide for loans from a 401(k) “because we want people to retire with a more robust financial picture than the industry norm.”

In addition, Lowe’s is evaluating financial-technology solutions that allow employees to shorten payroll cycles and set up special budgets and savings vehicles. The company also has a financial-relief fund that helps associates go through budget-busting events, such as fixing a broken-down car or covering an emergency medical expense.

“Our employees’ needs aren’t the same, even if they’re all lower-wage,” Teusch notes.

Companies that can’t afford to raise wages across the board may still be able to move at least some of their lower-wage employees into a new wage bracket, solving two problems at once.

Newman of Atrium Health says that roughly half of the company’s 60,000 employees are lower-paid, with about 9,000 employees earning less than $30,000 per year. This includes certified nurses’ aides or assistants and certified medical assistants, as well as environmental-services technicians, housekeepers, instrument technicians and patient transporters.

“We find that education is the key to helping this population manage money well, and they’re open and receptive to it,” she says.

Atrium offers several financial-education initiatives, including sessions on why investing in a 401(k) plan is a smart move, and why never borrowing from it is even smarter.

“What we did was give them regular education over the course of several months in small bites about our retirement plan. We can see over time that their 401(k)-loan usage goes down and their contributions to the plan go up, and the rate of contributions is rising, too,” Newman says.

Atrium has completed two rounds of education, the first with more than 100 environmental-services workers, and the second at a facility with a high proportion of lower-income workers, with similar results at both.

Beyond educating employees around a specific benefit, Atrium has begun to address another employment need–the ongoing shortage of nurses–with an innovative pilot program: putting Atrium certified nurses’ aides through the coursework necessary to become registered nurses.

Despite a high demand for nurses, only 4 percent of Atrium’s CNAs were going on to become RNs, struggling to afford tuition and continue working while completing their schoolwork, causing many to drop out of school.

“So we decided to create a program that would address those issues,” she says.

All of the employees in this highly customized pilot program are expected to graduate and will see their salaries jump, from an average of $24,000 to $68,000 per year, adds Newman, taking them out of the lower-wage bracket.

“We’re the largest employer in Charlotte, and we are the last out of 50 large cities in the country for economic mobility. If you’re born poor [here], you’re going to stay poor. You have just a 4 percent chance of moving out of poverty. We want to be a leader here and get people working for us and moving up in their careers,” she says. 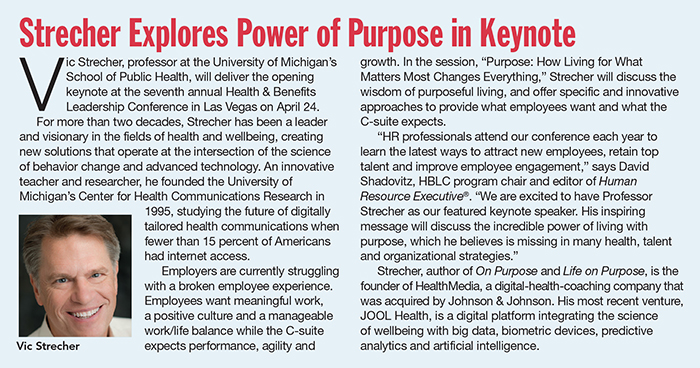 The Health & Benefits Leadership Conference will be held April 24 through April 26 at ARIA Resort & Casino in Las Vegas.

Ilyce Glink
Ilyce Glink is an award-winning financial journalist and the founder and CEO of Best Money Moves, a financial-wellness platform.