It seemed like the odds were stacked against Tru Vue/Apogee Enterprises.

In 2015, many of the manufacturer’s 4,000 workers – of which more than half (55 percent) were temporary production workers – were either calling in sick or simply not showing up to work at the plant, which operated 24/7. Complicating matters, the company’s talent pipeline was small and recruiting opportunities appeared limited because of its location in the rural community of Faribault, roughly 50 miles south of Minneapolis and St. Paul.

As the new HR manager at the glass and acrylic manufacturer of customer picture framing, Mandi Morrissey perceived this situation not as a problem for HR, but as an opportunity. Morrissey collected in-house data about when absenteeism and turnover mostly occurred, which was on nights and weekends. To motivate temporary plant workers to come to work and develop a more reliable or stable workforce, she developed a series of strategies that successfully addressed absenteeism and slashed the company’s 100-percent turnover rate among contract workers to 35 percent. Just as important, attendance soared from 48 percent to 75 percent.

“We offered an additional $1 per hour and $1.50 for overtime for perfect attendance on a monthly basis,” says Morrissey, adding that 75 percent of workers typically receive a monthly attendance bonus. “Our HR team spoke to every employee at each shift meeting … making sure our supervisors did a good job telling employees that if they called in sick, [they would] lose their attendance bonus for the month but could start fresh next month.”

When Morrissey joined the company in June 2015, she hoped to evolve HR into a strategic business partnership. She wanted the department to be more respected and perceived as a credible resource by everyone from line workers to senior executives. Under her guidance, HR has since transformed into a valued and trusted organization with staff at all levels personally seeking out her business knowledge, advice and insights. 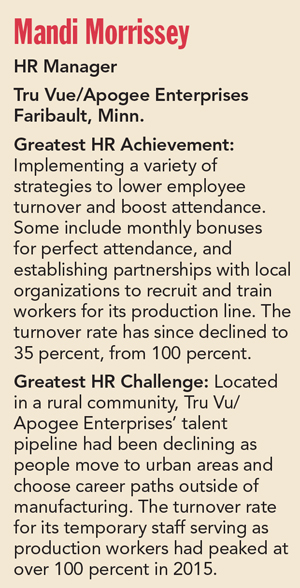 “Mandi has built trust and credibility … and can navigate all levels of the organization really well,” says Rob Sloyan, Morrissey’s boss and the company’s vice president of HR. “She is a tremendous relationship builder, a terrific project manager and an all-around good leader. She works hard, gets a ton done and really knows her stuff. She’s just an HR pro.”

To put a tighter lid on employee turnover and absenteeism rates, Morrissey drew a clear line for employees between their actions, company success and their paychecks.

Morrissey revised the company’s onboarding process so new hires would understand the financial impact of coming to work every day, how much more square feet of glass the plant could produce and how that generated more company profits that would be shared with them via monthly attendance bonuses.

Another onboarding change involved training. Morrissey realized that many new workers never handled glass before. In the past, they received minimal training during onboarding and  were thrown right onto a production line. Now, thanks to these changes, they train offline for one week, are taught how to safely handle glass and work at their own pace holding, racking and stacking glass so, by the end of the week, they are ready to tackle a fully-automated production line.

At employee meetings, supervisors also share how many workers made bonus and the names of those receiving the highest bonus payouts are posted on a metrics board that measures daily improvements.

Many more changes occurred, thanks to Morrissey. She introduced stay interviews and monthly employee roundtables to address employee questions and identify ways to make their jobs easier. She says the discussions grew so popular that the directors of operations and engineering routinely attend.

To help fill the company’s talent pipeline for a critical position – process tech – she coordinated the company’s partnership with two community colleges and a technical school to develop a nine-week, part time certificate training program for process techs. Likewise, she established another partnership with the local workforce center to conduct a five-week adult education course for employees who want to learn English and basic computer skills, and earn a GED.

So far, the process tech course has produced 25 graduates. Out of the estimated 15 employees who participated in the adult education classes, six were promoted to quality assurance or material handling positions.

“It was important for me to make sure that any employee who reached out to our HR group would get the same answer no matter who they talked to,” she says, adding that hiring managers in different production capacities had their own interview style and criteria for candidate selection. “It was a collaborative effort … . We agreed on best practices, documented them, trained everybody and then rolled them out.”

Looking back, it’s hard to believe everything Morrissey has accomplished in less than two years while working on her master’s degree in business administration that she plans on completing in September.

“It’s been a lot of hard work but really fun,” Morrissey says. “I have a great group of people who I work with, and my boss is really supportive and a great mentor. It’s been a great ride so far.”